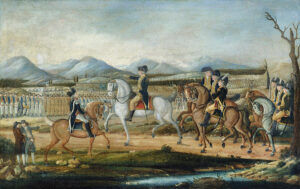 In 1791, Alexander Hamilton proposed an excise tax, or manufacturing tax, on the production of distilled spirits as a way to lessen the federal governments debt after the Revolutionary War. Unfortunately, they failed to predict the scale at which residents in Western Pennsylvania would reject this tax.

Farmers in Western Pennsylvania often distilled their excess rye, barley, and wheat into liquor to make it easier to ship and preserve. This meant that the whiskey tax disproportionately affected them and other smaller farms. As a result, the whiskey tax was met overwhelmingly negatively, with many farmers simply refusing to pay the tax. Overtime, these protests began to escalate into violence throughout western Pennsylvania, with protesters making threats, tarring tax collectors, and breaking into their homes. This finally culminated in the attack on Bower Hill in July of 1794. It was during this attack over 400 rebels in Pittsburgh set fire to the home of a tax supervisor, John Neville. In retaliation, Washington organized a militia to stop the rebellion, and by the time they reached Pittsburgh the rebels had all dissipated, effectively ending the whiskey rebellion. To learn more about the whiskey rebellion go here.