In November 2017 the New Mexico based oil and gas producer Merrion Oil and Gas Corp submitted a proposal to drill six hydraulically fractured horizontal gas wells on the Edgar Thomson Steel Works property, owned by U.S. Steel. According to the North Braddock Network and the Pennsylvania Department of Environmental Protection, the drilling was primarily located in North Versailles Township, but could run underground through the boroughs of East Pittsburgh, North Braddock, and Braddock. Merrion’s operations manager said the company planned to drill it’s well approximately 6,000 feet deep, then extend laterals between 8,500 and 10,000 feet long. Merrion applied for a conditional use permit to disturb the land and store water on those seven acres.

By December of 2017, Merrion’s conditional use permits were approved by North Versailles and East Pittsburgh, with East Pittsburgh’s council only expressing one dissenting vote. Merrion representative Ryan Davis stated that municipalities could gain bonuses for signing leases, royalties based on well production, and impact fees determined by a state formula, which led East Pittsburgh councilpersons to believe that the borough would gain around 60,000 dollars to demolish some of their abandoned buildings and build new homes. Davis had previously claimed that Merrion would pay $45,000-$50,000 per well in impact fees to the state Public Utility Commission and that East Pittsburgh and North Versailles would gain 60% of that fee, earning $27,000-$30,000 per well. This would be the main point of contention between supporters of the project and oppositional grassroots movements such as NBRFOF.

When Merrion submitted their proposal, the Edgar Thomson Steel Works had already been designated the one of the ten most toxic polluters in Allegheny County. Accordingly, the plant has a decades-long history of clean air violations. Toxics Release Inventory (TRI) data shows 40 toxic substances have been released into the air from the plant. Based on 2016’s study, air pollution from the Edgar Thomson Plant included 36,100 pounds of ammonia, 3,500 pounds of manganese, and more than 300 pounds of lead. These pollutants can affect the respiratory system, nervous system, and cardiovascular system (Source: Toxicten.org). The onsite gas drilling operations would release more harmful pollutants to communities of Braddock, North Braddock and East Pittsburgh.

Additionally, babies born to mothers who lived within 0.6 miles (1 km) of a site well like the one proposed at the steel plant are 25% more likely to have low birth weight than if they lived beyond 2 miles (3 km). With fracking comes a lot of noise pollution, lights, and odors. According to the John Hopkins Bloomberg School of Public Health, 23% of their research pool suffered from migraines, 25% experienced severe fatigue, and 24% had current symptoms of chronic rhinosinusitis, or three or more months of nasal and sinus symptoms. Such a 0.6 mile radius includes not only Braddock, but also East Pittsburgh, North Versailles, North Braddock, Rankin, Chalfant, and other smaller municipalities.

In response to the proposal, North Braddock Residents for Our Future launched into action and began organizing. For the remainder of 2018, NBRFOF spread the word to community members and urged residents to write their local, state, and federal representatives to combat the unconventional wells Merrion Oil Corp was proposing. They encouraged residents to sign the “Don’t Frack Braddock” petition, and held several public outreach events, like the event “We Say No to Fracking,” and the informational “Clean Air Council” table, hosted during Braddock Community Day. These efforts continued into 2019, with NBRFOF continuing the campaign against Merrion into the following year. March 27, 2019, the Department of Environmental Protection, Office of Environmental Justice hosted a public information meeting at the Braddock Volunteer Fire Department Hall. It was at this meeting that more than 200 residents and concerned stakeholders told representatives of DEP, U.S. Steel, and Merrion Oil and Gas that they did not want these wells and the additional pollution they would bring in their neighborhoods. 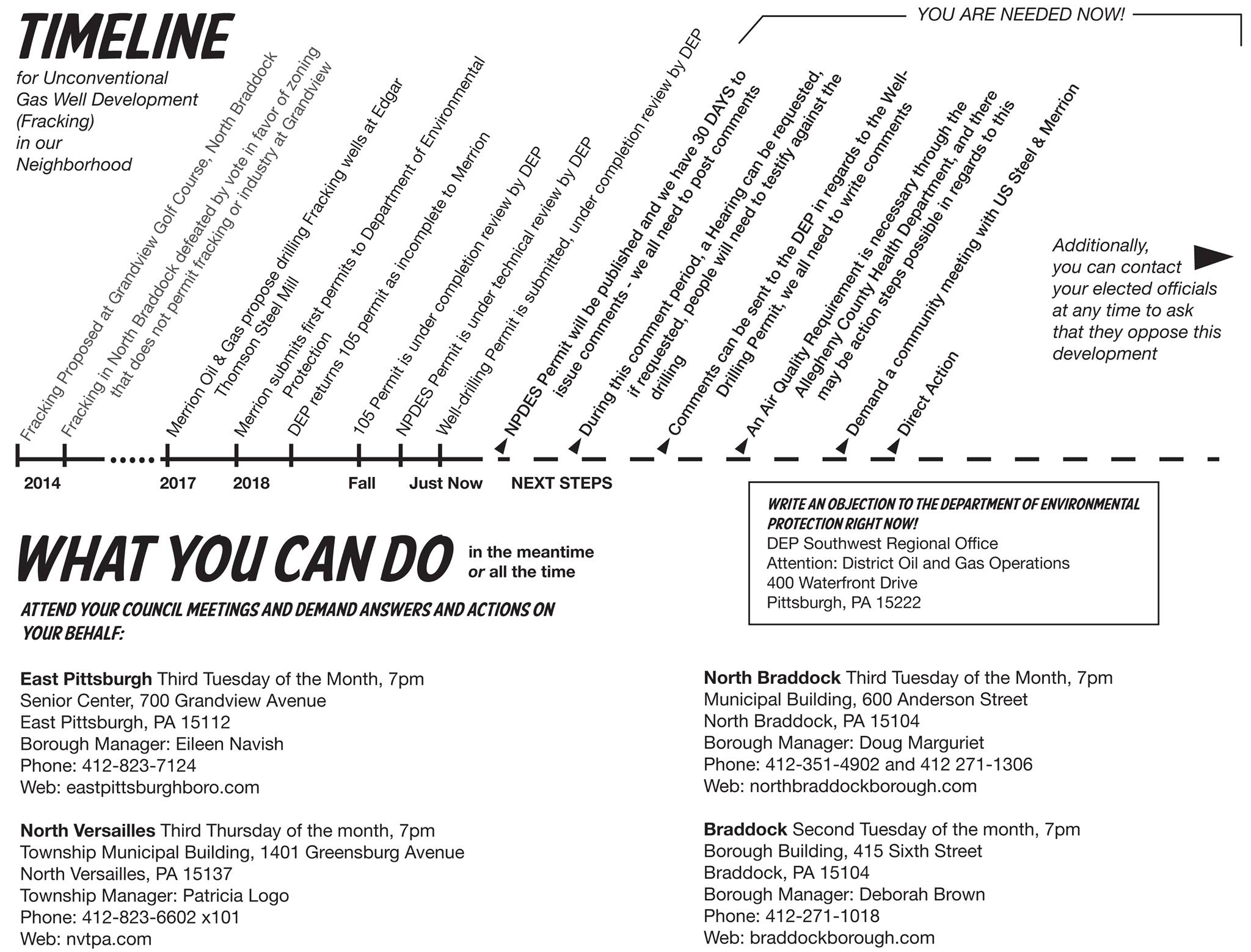 Timeline for Unconventional Gas Well Development (Fracking) in our Neighborhood, by NBRFOF 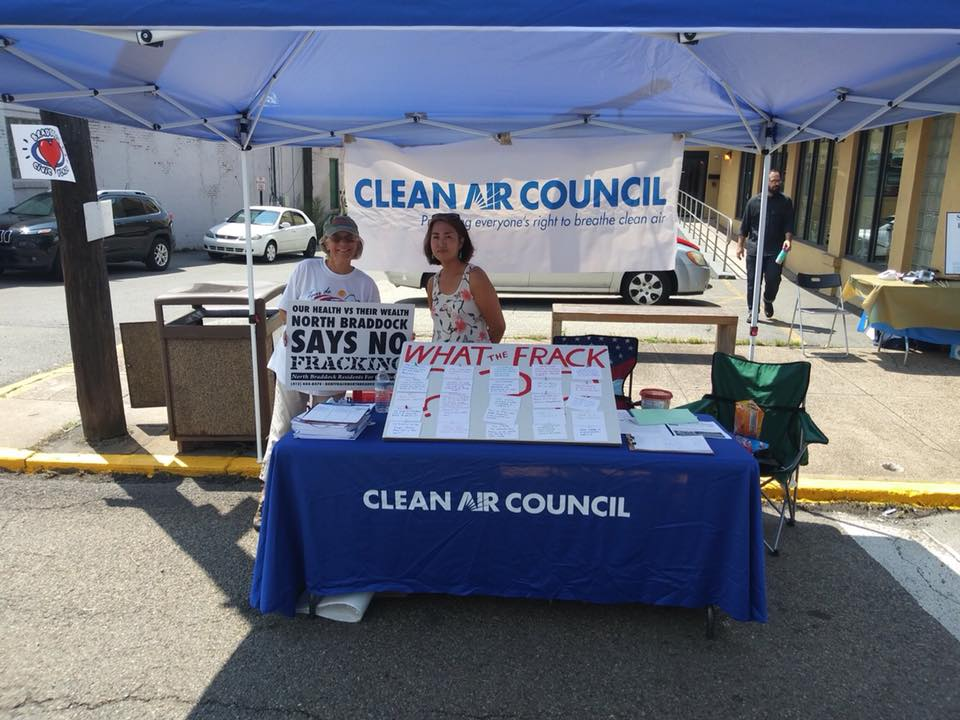 The Department of Environmental Protection sent Merrion their second notice that its Erosion and Sediment Control Permit application was still deficient. The four-page list cited Merrion’s lack of site drawings, hydraulic plans, and soil displacement documentation. The permit granted by East Pittsburgh borough had expired earlier that month, and Merrion sought to extend it through appeals. This proved unsuccessful when the East Pittsburgh borough denied Merrion’s zoning approval and the DEP suspended it’s review of Merrion’s applications by a 3-2 margin, and in December the Department ceased their review of the proposal entirely. The DEP ruled that Merrion lacked the authority to progress the application process, and brought into question the affability of the project to meet local permit requirements. While some residents and environmental groups considered this a victory, Merrion’s  attorney, Harlan Stone, stated that the company would appeal the decision in Common Pleas Court.

On April 25th, 2021 U.S. Steel announced that it was ending the proposed shale gas well project at the Edgar Thomson Steel Works. This marked an important victory of the grassroots struggle and tireless organizing of NBRFOF and other community members and activists who fought to prevent additional environmental and human health harms in Braddock, North Braddock, East Pittsburgh, and surrounding areas.

“The time has come for those on the frontlines all across the state to recognize that true power exists when people join together, and standing up to these giants is not impossible. These historic victories should show Merrion that they can keep trying, but we will keep winning.” (Edith Abeyta, of North Braddock Residents for Our Future)