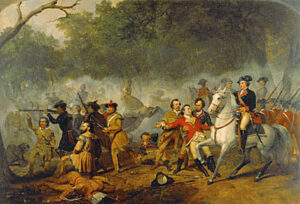 Painting of the French and Indian War by Junius Brutus Stearns. Source: wikimedia

Tensions had been brewing between France and Britain for sometime, and one major point of contention was the status of the Ohio River Valley. Britain and France had very loosely defined borders, and both countries laid claim to the region that would later become known as Pittsburgh. The French inflamed these tensions by constructing 3 forts throughout the region, which ultimately led to the outbreak of conflict.

The initial conflict between Britain and France ultimately expanded past the Ohio River Valley area and grew to encompass all of North of America, in what was known as the French and Indian War. Simultaneously, Britain and France were embattled overseas in a local war, which became known as the Seven Years War. By 1757 the war began to turn in favor of the British, and in 1758 the French army was expelled from Fort Duquesne by General John Forbes. Forbes renamed the surrounding area in honor of the British statesman William Pitt the Elder, and rebuilt a new fort, Fort Pitt, to ensure their ongoing strategic military dominance. The war ultimately ended in peace stateside between Britain and France in 1763, and the brand new settlement of Pittsburgh was formed in 1764.