-- Until the early 17th century - Native American History of Pittsburgh 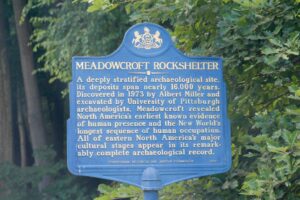 For thousands of years before European colonization, the people of the Monongahela, Hopewell, and Adena tribes settled in what is now known as the Pittsburgh metropolitan area. There is also evidence that the Pittsburgh area was home to one of the earliest known settlements in North America, with the Meadowcroft Rockshelter in Washington County being carbon dated between 13,000 and 19,000 years old.

The Meadowcroft site indicates that the Pittsburgh area has been home to ancient people’s since the beginning of the “Paleo-American” period, when the last ice age lowered ocean levels, and enabled the first people to cross the Bering Land Mass and cross over into North America. The Native American cultures in Pittsburgh were primarily based on a hunter gatherer system, but by the 17th century many of the original cultures had disappeared or been forced out due to the rising influence of European colonization. This did not mark the end to Native American settlement in the Pittsburgh area however, as many cultures migrated in and out of Pittsburgh throughout the 18th century when they were forced out of their own homes.