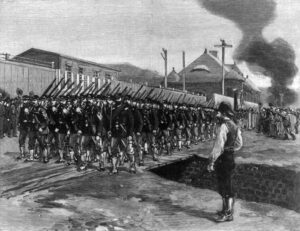 Illustration of the Homestead Strike, published in Harpers Weekly in 1892. Source: Wikipedia

When the unions’ contract was scheduled to end, Henry Clay Frick, chairman and chief executive of Carnegie Steel, announced pay cuts at Homestead Steel Works. The workers rejected the wage cut, but Frick refused to negotiate, instead shuttering the plant. 3800 workers were locked out of Homestead Steel Works, and a barbed wire topped fence was constructed to keep them out. Once the plant was sealed, Frick hired armed private security guards, from the Pinkerton National Detective Agency. The agency was commonly used by anti-union factory owners, and they were well known for infiltrating plants and breaking strikes. On the morning of July 6, 300 Pinkerton agents arrived via the Monongahela River on barges. They were met with armed workers who rushed to the river side, and the two groups exchanged heated gunfire. The workers had the benefit of higher ground, and they were able to secure the Pinkerton’s surrender. Despite this, when the Pinkerton agents came ashore, the workers continued to brutally assault the Pinkerton agents despite the surrender. It ended up being one of the deadliest labor conflicts in history, with over a dozen people killed.

While many members of the public were initially in favor of the strikers, public opinion changed after their brutal treatment of the Pinkerton guards after they arrived on land. The Homestead Plant was able to return to operation in mid-August, as the result of 1800 strikebreakers, and the union admitted defeat by October. The union movement was damaged severely by the events of the strike, and the resulting failure.