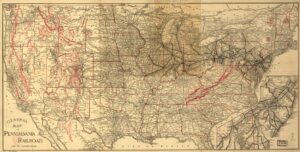 Map showing the lines and connections of the Pennsylvania Railroad (c 1893). Source: Library of Congress

The President of the Pennsylvania Railroad Company, or the PRR, was J. Edgar Thomson, who remained at its helm until his death in 1874. Thomson invested in Andrew Carnegie’s initial steelworks projects, ultimately becoming the namesake of the Edgar Thomson steel mill in Braddock. The PRR went on to become one of the most prominent railroad companies on the east coast, through a combination of new constructions and acquisitions of existing companies.