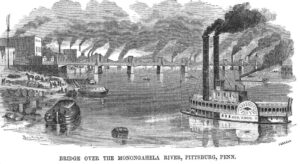 Since it’s founding, Pittsburgh had been primarily focused on it’s burgeoning coal industry, and in turn has struggled with air pollution from the beginning. The presence of such hazardous coal and industry in such a highly populated place has resulted in many residents and visitors lodging complaints about the air quality and standard of living, dating back as early as 1802. During this period of heavy industry, Pittsburgh was described as smoky, dusty, dirty, and covered in coal, creating a hazardous living environment.

As a result of these complaints, Pittsburgh’s first air pollution ordinance was passed in 1863. Unfortunately, this ordinance had little effect on the air quality, and the smoke and coal particles in the air continued. The ordinance lacked the focus it needed and the enforcement it needed to enact true change on Pittsburgh’s environment. The ordinance was limited in focus to only railroad pollution, rather than the more toxic industries like coal mining and factories, which diminished it’s value. Pittsburgh would go on to continue to struggle with air quality into the 20th and 21st centuries.