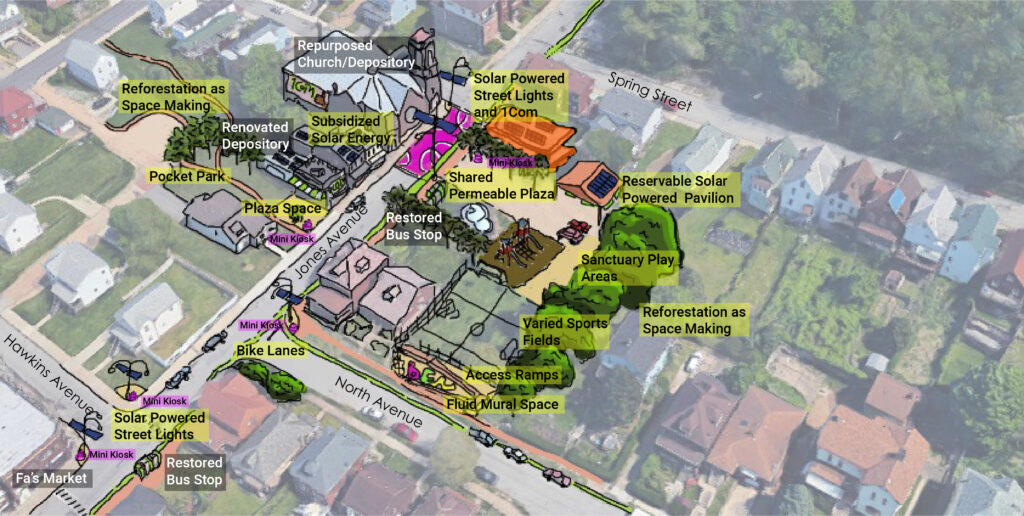 “I look at it in the lens of Greater Braddock. I don’t really recognize the borders. I kind of view it as the 15104 area. (…) My goal for it is to one day all three communities to be one because in essence they really are. Based on the declining populations (…) it would kind of make sense to share the resources between all three of the communities.” – Lou Berry, Lifetime resident and community activist

Braddock, North Braddock, and surrounding communities share not only their industrial past but also a rich history of community action against labor, environmental, and other forms of racial capitalist exploitation. Yet, municipal divisions often result in miscommunication, and a lack of resource sharing and opportunities for self-efficacy.

1Community (1Com) Kiosks are nodes for access to information and resources to benefit the area’s residents which would be located in Braddock, North Braddock and East Pittsburgh. The kiosks would disseminate medical, financial, agricultural or environmental information; distribute physical resources such as nutritious food, contraceptives, books, or garden supplies; maintain plaza or green spaces to host workshops, cookoffs, and other community gatherings; and direct residents and visitors to local vendors and businesses. These drawings explore this vision using three initial locations alongside Washington, Talbot, and Jones Avenues, out of many that could be established throughout the area, which were identified through conversations with local residents.